I got yet another email from the fantabulous Dave Woodward of Badgerlord Studios, and...

(Do you remember who he is? If you don't, let me remind you! He's the guy who is doing all of the art for Boldly Go. You can see all of the hard work he's already done by clicking on this self-referential bit of text right here! If you want to hire him for things, I'm sure he would be both excited and gratified to work with you! Let him know I sent you!)

Okay, now that that's out of the way, I got an email from Dave that had more art in it. Specifically, the art of the sample ship, which is referenced quite frequently throughout the text of Boldly Go. That's right, I'm talking about the dauntless ship that is currently crewed by our dauntless sample characters. Put your hands/hand analogues together and give a warm welcome to the SFS Oswego! 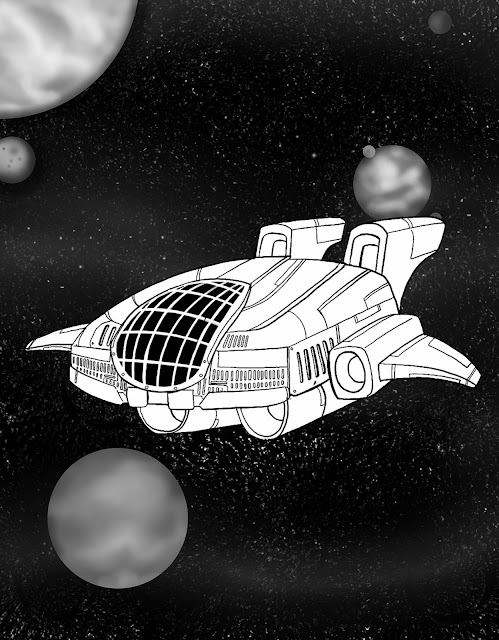 I have to say, I'm really happy with how this turned out, especially since I gave Dave virtually no guidance at all beyond, "yeah, so I want something iconic-looking that's not so iconic that people, and large entertainment conglomerates, can sue me for it." He sent me a half-dozen drawings or so and this is the one that I liked the best. I really do love that giant viewing window in the center!

As is right and proper for a game set in this particular genre, the Oswego is every bit as much of a character as the ones who crew her. Part of this has to do with the fact that, during character creation, players get to assign a traits to their new ship. As with character traits, ship traits can be pretty much anything the players can imagine. In many cases, players try to make a "well-balanced" ship with traits that cover a wide variety of possible adventure scenarios. In other cases, however, I've had players make experimental ships, abandoned alien ships that they've found and barely know how to drive, medical ships, science ships, and the ever-popular, 'bristling with weaponry and heavy shielding' ships.

That last sub-category of ship probably doesn't have the giant viewing window. I'd imagine they replace the window with more guns.

Since the Oswego is a character, I thought I'd run through its traits. Keep in mind that this ship was designed organically by one of my long-suffering teams of playtesters, so it is, for all intents and purposes, a "real" ship made by "real" people.

The Oswego is a part of Space Fleet's new line of deep-space exploratory vehicles. It rolls off the factory assembly line with the following customized traits and features:

The Oswego, and ships like it, can be yours for the low price of zero galactic credits, because we don't use money in the future, for some reason!
Posted by geoffwritesstuff at 1:41 PM No comments: