We're almost done with the roster for the Oswego. This installment features the last two members of our bridge crew. Then I'm going to follow that up with another post devoted to the dauntless captain of our heroic ship. (The captain deserves a post all his own, for personal reasons. You'll see why when we get there.)

As a constant reminder, the art in this post (and all other Boldly Go posts) is provided by the amazing Dave Woodward of Badgerlord Studios. He's not single, ladies, but he does do commissions! 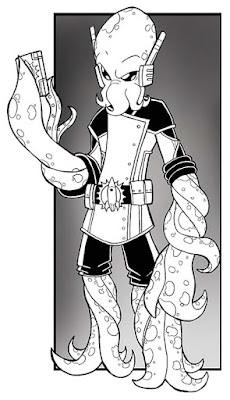 Character number seven is a personal favorite of mine, and is none other than Helmsman Grummox Benthos. Grummox first came to life many years a go in a funny sci-fi novel I was writing. I may try to finish that novel someday, especially since I've learned quite a lot about writing between then and now. I'm not sure if I'd keep Grummox in that story or if I'd change him a bit...It might be too confusing. Then again, it might give the fans (he says, somewhat hopefully) something to argue about for the rest of time.

Oh, right. Grummox! He's a krakenoid, a species of squid people that originated on the oceanic planet of Yurgos. The krakenoids have a culture based around their military, and hierarchy and proper protocol. Grummox is an exemplar of his species, and is even more fussy and hidebound than the usual krakenoid. As described by someone who played him at a playtest, he's, "kind of a cross between Worf and Sam the Eagle."

Character number eight is Ensign Vexxa Smith-Merienas. She's best friends with Janine Tarian and a member of the Oswego's security team. Vexxa is also the game's example of a Mixed-Species character; in her case, she is half human and half krakenoid. Mixed-species characters are able to mix and match benefits from both of their parent species, but also gain the I Don't Fit In trait. Many characters who are mixed-species join Space Fleet in order to "find themselves" and find a greater purpose.

Vexxa is more than a bit like that. She grew up in the Terran Embassy on Yurgos, all but unaware of the finer points of krakenoid culture. She has always felt different and like an outsider, even on her own planet, and for that reason she is often hesitant and unsure of herself. She does, however, possess a natural empathy which makes her an asset to any security detail she is assigned to. She's often teamed with Janine, and acts as the "good cop" to Janine's "bad cop."
Posted by geoffwritesstuff at 7:02 PM No comments: